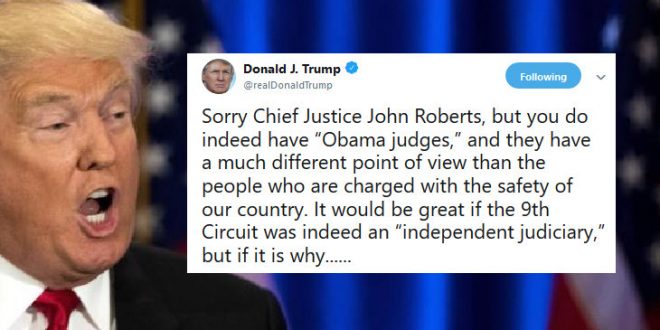 Trump may end up regretting this attack:

President Trump fired back at Chief Justice John Roberts on Wednesday after the leader of the Supreme Court rebuked the president over his criticism of “Obama judges.”

“What we have is an extraordinary group of dedicated judges doing their level best to do equal right to those appearing before them,” Roberts said in the statement.

Sorry Chief Justice John Roberts, but you do indeed have “Obama judges,” and they have a much different point of view than the people who are charged with the safety of our country. It would be great if the 9th Circuit was indeed an “independent judiciary,” but if it is why……

…..are so many opposing view (on Border and Safety) cases filed there, and why are a vast number of those cases overturned. Please study the numbers, they are shocking. We need protection and security – these rulings are making our country unsafe! Very dangerous and unwise!