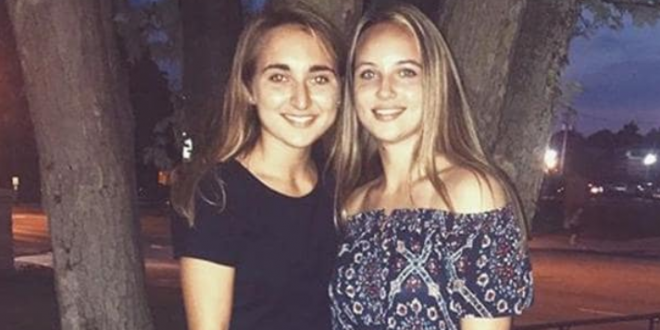 A GoFundMe campaign to support college athlete Emily Scheck [above right], who was disowned by her family after they discovered she had a girlfriend, surpassed $100,000 on Tuesday — well over the initial $5,000 goal, leading Scheck to end the campaign.

“Thank you to everyone who showed their love and support in this difficult time,” Scheck said in a statement released on Tuesday by a spokesperson at Canisius College, where Scheck is a sophomore. “The positive outreach has been unbelievable. I never expected this amount of support.”

By the time Scheck stopped accepting donations on her fundraising page Tuesday, the campaign had raised $100,515 from 2,573 donors. “With Thanksgiving coming up, I am grateful for everyone in my life who have continuously been there for me,” Scheck said in her statement. “I now know that family is not always something you have, but something you find.”

Her mother had found a picture of Sheck and the girl she was dating, and she was horrified by it. Her mother told her that she was disgusting, and that she had to make a choice: come home and get therapy for her same-sex attraction, or be cut out of their lives forever. Sheck let her mother rant, not knowing what to do.

Not long after that she came home to a shocker: her car’s license plates had been removed, and her car was full of her childhood belongings from home — awards, plaques, stuffed animals.

She had bought her own car, but because her parents were paying for the insurance they had rescinded the payments, her father had driven to Buffalo from their home near Rochester, N.Y., and taken the license plates. He had also removed all of her belongings from their home and stuffed them in her car.

Emily Scheck can retain her eligibility and continue to receive GoFundMe donations that assist her with living and educational expenses. pic.twitter.com/jut5EjPLnU