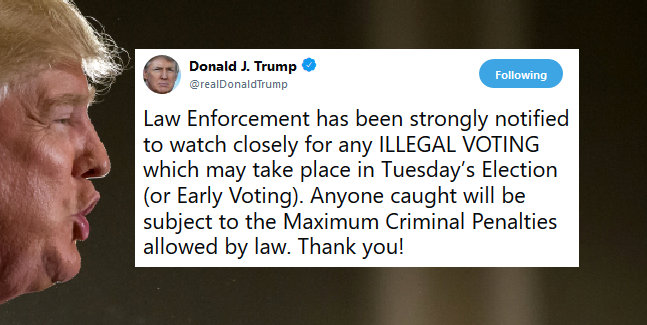 When President Trump tweeted an ominous pre-midterms warning to would-be fraudulent voters, critics were quick to note that voter fraud is statistically nonexistent in the United States; to recall that the president’s own voter-fraud commission, chaired by Vice President Mike Pence and led by controversial Kansas Secretary of State Kris Kobach, had not cloaked itself in glory before being disbanded; and to contend that the president’s true message was that certain voters would not be wrong to approach their assigned polling places with a sense of unease.

Law Enforcement has been strongly notified to watch closely for any ILLEGAL VOTING which may take place in Tuesday’s Election (or Early Voting). Anyone caught will be subject to the Maximum Criminal Penalties allowed by law. Thank you!

Previous Author Stephen King: Vote Out GOP Rep. Steve King, I’m Tired Of Being Confused With This Racist Dumbbell
Next Massachusetts Ad Urges Against Repealing Transgender Rights: “Be A Masshole Not An Asshole, Vote Yes On 3”