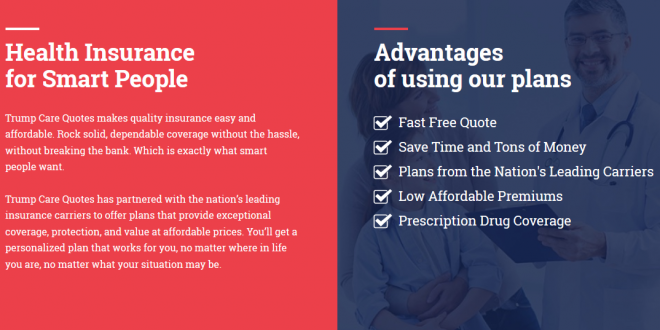 A South Florida company that collected more than $100 million in premiums selling sham health insurance “for smart people” through a network of deceptive websites, including one called trumpcarequotes.com, was ordered by a federal judge to temporarily shut down following consumer complaints to the Federal Trade Commission.

Simple Health Plans, based in Hollywood, lured “tens of thousands” of consumers with false promises of covering pre-existing medical conditions and prescription drugs for monthly premiums ranging from $40 to $500, the FTC said in a 28-page complaint recently unsealed by a federal judge.

The FTC said consumers who thought they had bought comprehensive health insurance discovered they were actually uninsured, including some who were saddled with medical bills they had assumed would be covered by Simple Health.

Stephen J. Dorfman is the owner or manger of Simple Health Plans and various other connected healthcare marketer companies that draw people in through telemarketing calls and various scammy, misleading websites. The Trump Care Quotes website, which is still accessible online, claims to connect customers with insurance agents, and offer “health insurance for smart people.”

In the FTC’s request for a temporary restraining order, the agency alleges “the architect of this scam,” Dorfman, “siphoned millions of dollars of proceeds from defrauded consumers to pay for private jet travel, gambling sprees in Las Vegas, the rent for his oceanfront condominium, luxury automobiles, over $1 million in jewelry, and even the nearly $300,000 cost of his recent wedding at the St. Regis Hotel in Miami.” Dorfman reportedly used the money to purchase a Lamborghini and Rolls Royce, and spent $57,000 on one night club tab.