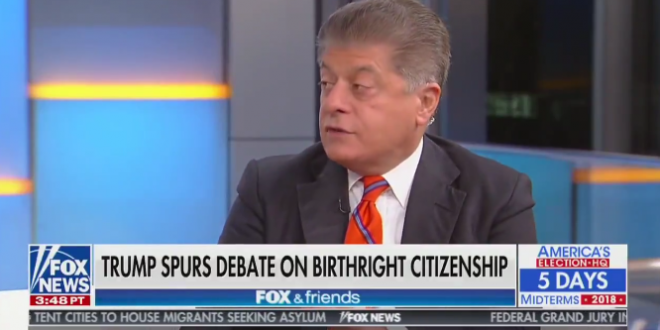 “Look, the president can’t change the plain meaning of the Constitution with the stroke of a pen. Congress can’t change the Constitution. If the president wants legislation that says, for example, that Congress declares that birthright citizenship no longer exists, that legislation would be just as unconstitutional as a presidential executive order declaring that birthright citizenship doesn’t exist.

“I think the president knows that. I believe he has generated this because he wants the debate, he thinks this debate will help Republicans in the five days remaining before the midterms. I don’t think he seriously thinks he can change the Constitution with an executive order.” – Former judge Andrew Napolitano, speaking today on Fox News.

Fox’s Andrew Napolitano says there’s basically no way Trump or Congress can literally undo birthright citizenship, because the 14th Amendment says what it means and means what it says, and that Trump is just creating a media narrative to help the GOP in the midterms. pic.twitter.com/tXQn55aW8r