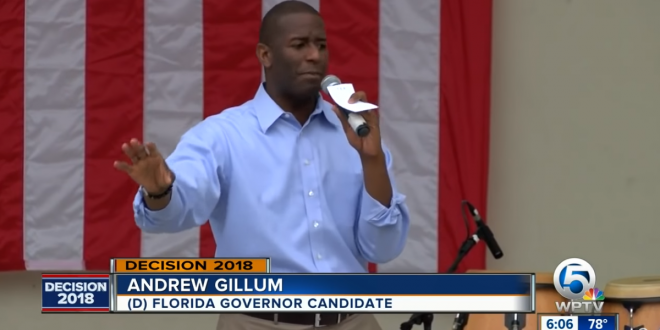 Campaign officials for Democratic gubernatorial Andrew Gillum say they are monitoring what appears to be a closer race against Republican Ron DeSantis than it first appeared. By Thursday, with more votes tallied and while some discrepancies are sorted out, DeSantis’ lead has narrowed dramatically. At noon Thursday, DeSantis led by only about 43,000 votes, which is just outside (but very close to) the 0.5 percent gap that is needed to trigger a recount, per Florida law.

“On Tuesday night, the Gillum for Governor campaign operated with the best information available about the number of outstanding ballots left to count,” said a statement Thursday from Gillum’s campaign. “Since that time, it has become clear there are more uncounted ballots than was originally reported. “Our campaign, along with our attorney Barry Richard, is monitoring the situation closely and is ready for any outcome, including a state-mandated recount,” the statement said.