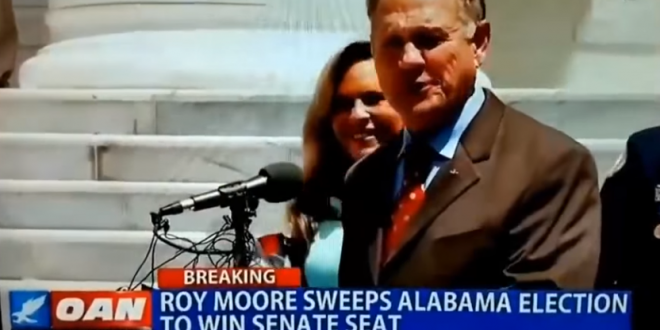 The head of conservative outlet One America News Network (OANN) said Thursday that the organization will file an amicus brief in support of the White House as it faces a lawsuit from CNN over the revocation of reporter Jim Acosta’s press pass.

OANN CEO Robert Herring wrote on Twitter that the organization backs the White House’s decision in part because he believes Acosta prevents the network’s own reporters from asking questions.

Emerald Robinson interviewed Trump for OANN last month. Trump has not appeared on CNN at all since he took office.

The most infamous staffer at OANN is Pizzagate nutbag Jack Posobiec, who once held up a “Rape Melania” sign at an anti-Trump rally and who this week was linked to literal Nazis, one of whom committed suicide after it appeared that the FBI was going to arrest him for planning violence after the synagogue attack.

(1) WE are going to file in the CNN vs White House court an Amicus Brief in favor of the White House. Acosta’s actions are stopping our people from getting their questions answered, so that we can give our audience the real news direct from our President. @OANN #CNNvsWhiteHouse

(2) Can’t believe Fox is on the other side, but they have direct communication to the President. We are lucky if we get a five minute interview once a quarter. @OANN #CNNvsWhiteHouse

This is embarrassing. Looks like OAN called the race for Roy Moore on Tuesday — And published a (now deleted) article insisting the samehttps://t.co/Pt7fxIhXaz pic.twitter.com/Mwkk868jq6

BREAKING: @OANN to side in CNN vs White House case backing up the White House against the antics and disruptions of Jim Acosta that cost the President and other reporters valuable time for our country