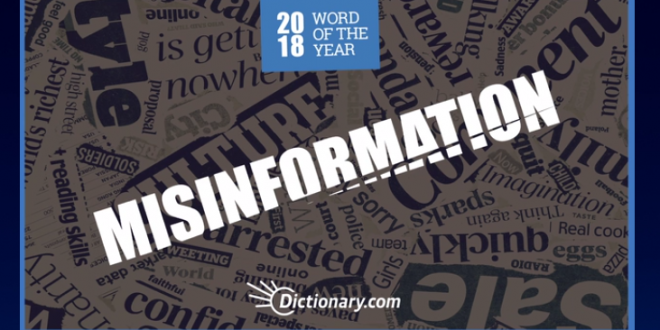 Dictionary.com’s Word Of The Year: “Misinformation”

Misinformation, as opposed to disinformation, was chosen Monday as Dictionary.com’s word of the year on the tattered coattails of “toxic,” picked earlier this month for the same honor by Oxford Dictionaries in these tumultuous times.

Jane Solomon, a linguist-in-residence at Dictionary, said in a recent interview that her site’s choice of “mis” over “dis” was deliberate, intended to serve as a “call to action” to be vigilant in the battle against fake news, flat earthers and anti-vaxxers, among other conduits.

It’s the idea of intent, whether to inadvertently mislead or to do it on purpose, that the Oakland, California-based company wanted to highlight. The company decided it would go high when others have spent much of 2018 going low.

Our #WordOfTheYear2018 isn’t just any word. It’s a call to action. We’ll be sharing the tools to fight #misinformation all day today.

Previous Former Border Patrol Official Defends Pepper Spray Use: It’s So Natural You Can Put It On Your Nachos [VIDEO]
Next Homocon Former House Rep: The GOP Had It Coming