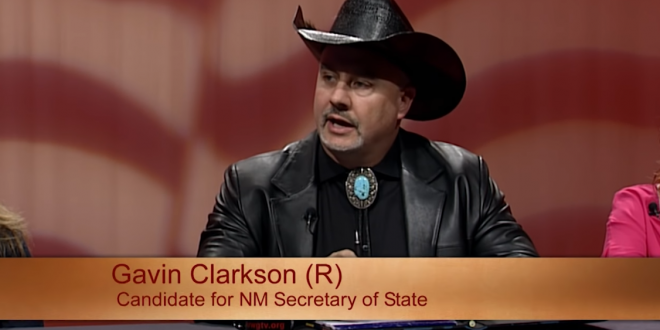 Gavin Clarkson, a recent candidate for New Mexico secretary of state, experienced a one-of-our-50-is-missing moment earlier this month when applying for a marriage license in the nation’s capital.

Clarkson, who lives in Las Cruces, and his then-fiancée visited the District of Columbia Courts Marriage Bureau on Nov. 20 to apply for a marriage license.

But, once there, the couple encountered a small problem, Clarkson said. The clerk wouldn’t accept Clarkson’s driver’s license — from New Mexico — as proof of his identity. Rather, the clerk, who mistakenly believed Clarkson was a foreign citizen — said he would have to provide an international passport to get the marriage license.

The clerk then went to check with a supervisor after Clarkson objected, and the supervisor also said Clarkson would need a passport.

“You know you are from flyover country when you are applying for a marriage license, give them your New Mexico driver’s license, and they come back and say: ‘My supervisor says we cannot accept international driver’s licenses. Do you have a New Mexico passport?'” Clarkson said in a Facebook post after the incident.

“She thought New Mexico was a foreign country,” he said of the clerk. “All the couples behind us waiting in line were laughing.” The clerk also reportedly complimented Clarkson on how well he spoke English.

A spokesperson for the bureau issued an apology: “We understand that a clerk in our Marriage Bureau made a mistake regarding New Mexico’s 106-year history as a state. We very much regret the error.”