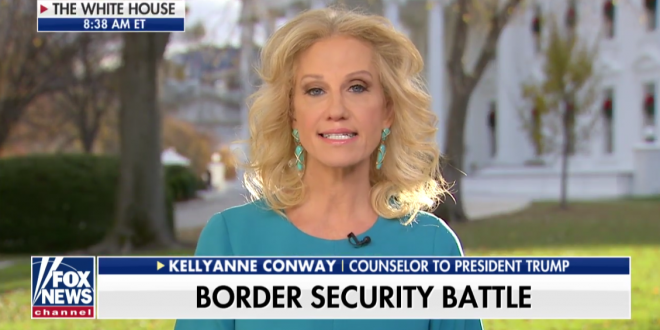 Counselor to the president Kellyanne Conway claimed Tuesday that President Donald Trump’s warnings of violent migrants making their way towards the U.S. were vindicated over the weekend by clashes at the Mexican border, even though no U.S. law enforcement officers were seriously injured amid efforts to block crowds of migrants attempting to cross the border into California.

“Everything that was predicted by the president and Secretary Nielsen and homeland security and others has come true,” Conway told Fox News’s “Fox & Friends” on Tuesday. “There are violent elements in this caravan. The mainstream media only wants you to see the children, the families. They’re not telling you that most of the caravan are males traveling by themselves.”

Previous Corsi Claims To Have “Joint Defense” Deal With Trump, Says He Got Immunity For Testimony Against Stone
Next James Comey: If A Democratic President Behaved Like Trump Does, Republicans’ “Heads Would Explode”