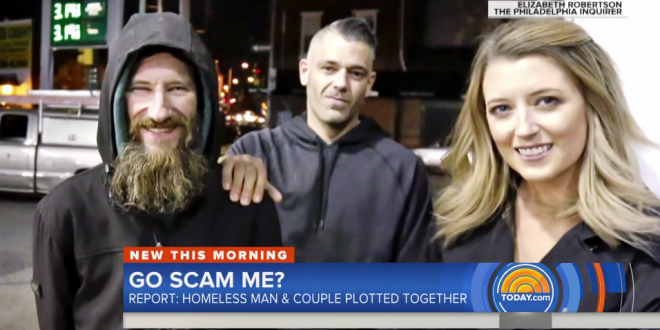 A New Jersey couple accused of scamming a homeless good Samaritan out of hundreds of thousands of dollars as part of an online fundraiser that went viral a year ago had initially conspired with him to concoct a “fictitious story,” prosecutors allege.

A complaint obtained by NBC Philadelphia says couple Mark D’Amico and Kate McClure made up a GoFundMe campaign in honor of Johnny Bobbitt Jr. so that all three could raise money by deceiving generous donors.

The three are expected to face charges that include conspiracy and theft by deception, a source familiar with the case told NBC Philadelphia, adding that D’Amico and McClure surrendered to authorities on Wednesday.

The couple launched their GoFundMe drive with a claim that that the homeless man had given them his last $20 after their car ran out of gas. He later sued them, claiming they spent most of the donated $402,000 on themselves, buying a new BMW and lavish vacations. But he was allegedly in on the scam from the start.

A couple raised hundreds of thousands of dollars for a homeless man, now it’s being reported that all three were involved in the get rich quick scam and all three face charges of conspiracy. pic.twitter.com/FTRCDTX6hm