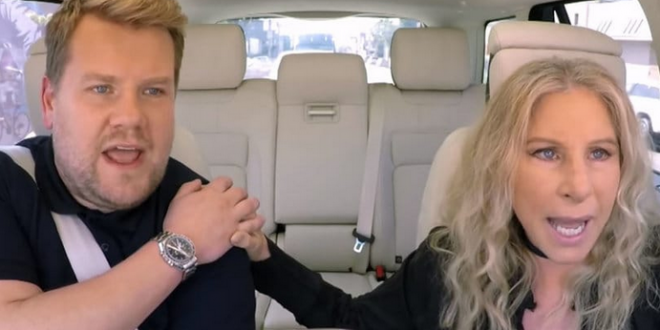 Barbra Streisand seemingly has every award under the sun (she’s one of few people to receive EGOT status), but the famous singer isn’t immune to everyday problems.

On the latest installment of “Carpool Karaoke,” which aired Thursday night, Streisand tells James Corden that she failed the test to renew her driver’s license three times. She says she’s constantly talking and writing while driving, and that she’s nervous behind the wheel.

“How do you think I feel?” the “Late Late Show” host responds, before taking it in stride. “If this is how I go out, I’ll take it. ‘How did you die?’ ‘Barbra Streisand.’”

During the “Carpool Karaoke” sketch, the two sung such Streisand hits as “No More Tears,” “The Way We Were,” “What a Wonderful World” and “Don’t Rain on My Parade.”

The star also discussed her past issues with stage fright. “I don’t get nervous nervous, but I don’t enjoy it; I get scared. I just don’t want to disappoint people,” she explained. Streisand’s album comes out Friday.

Watch for the bit where Babs reveals having called Tim Cook because Siri was saying her name wrong.

Previous Michele Bachmann Leads Evangelical Meeting With Murderous Saudi Leader: “Pray For The Crown Prince”
Next Jeanine Pirro Wants To Know If Caravan Migrants Are Pedophiles And Men Who Beat Their Wives [VIDEO]