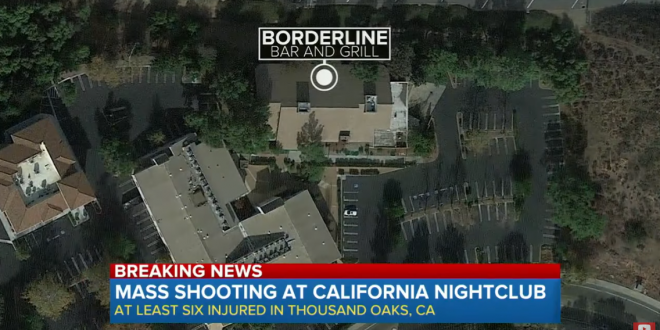 A gunman threw smoke bombs and rained bullets on a crowd of hundreds inside a Thousand Oaks bar that is popular with college students Wednesday night, leaving 13 dead including a Sheriff’s sergeant shot trying to stop the carnage.

The massacre occurred at the Borderline Bar & Grill, with the assailant firing wildly into the crowd. In addition to the dead, 10 other people may have been injured, according to Sheriff Geoff Dean, who added that it’s too early to know if the shooter took his own life. The gunman burst into the bar around 11:20 p.m., cloaked in all black.

Ventura County Sheriff’s Department Sgt. Ron Helus and a California Highway Patrol officer entered the bar first and were met with gunfire from the suspect, whose identity was not immediately known. Helus was shot several times and died at an area hospital early Thursday morning, according to Dean.

Ventura County Sheriff Geoff Dean has described the scene of the bar shooting in Thousand Oaks, California as “horrific.”

“It’s a horrific scene in there, there is blood everywhere and the suspect is part of that, and I didn’t want to get that close and disturb the scene and possibly disturb the investigation,” he said, adding that the motive is still unclear.

Dean said investigators had not found any type of assault rifle within the bar. “Right now as far as we know there was only one handgun, but that could certainly change as we do a more thorough search of the building.”

It was college night and country two-step lessons were being offered Wednesday at the Borderline, according to its website. When the gunman entered, people screamed and fled to all corners of the bar, while a few people threw barstools through the windows and helped dozens to escape, witnesses said.

Tayler Whitler, 19, said she was on the dance floor with her friends nearby when she saw the gunman shooting and heard screams to “get down.” “It was really, really really shocking,” Whitler told KABC-TV as she stood with her father in the Borderline parking lot. “It looked like he knew what he was doing.”

The University has determined that multiple Pepperdine students were on site at Borderline Bar and Grill in Thousand Oaks. At this time, the University is working to identify and provide support to those students. (1/2)

Pepperdine officials are working with authorities and will provide updates as more information is available. The University offers its deepest condolences and is praying for everyone involved in tonight’s tragic events. (2/2)