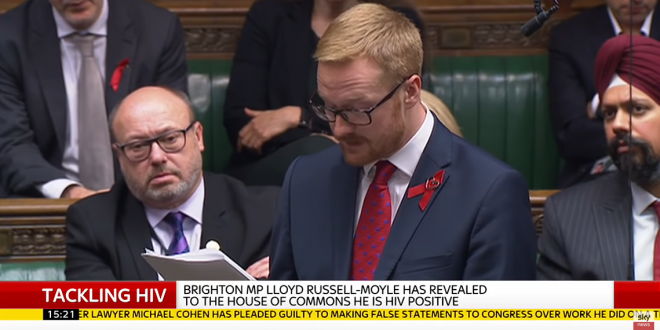 The Labour MP Lloyd Russell-Moyle has used a debate in the Commons to announce he is HIV positive, making a personal speech he said was intended to tackle the stigma still associated with the condition.

The first parliamentarian to make such an announcement in the Commons, and the second MP to announce they are HIV positive, Russell-Moyle said he was diagnosed 10 years ago, when he was 22, and that medical advances meant he could live an entirely unaffected life.

“I wanted to be able to stand here in this place and say to those who are living with HIV that their status does not define them,” Russell-Moyle, the MP for Brighton Kemptown since 2017, said in a speech that drew tributes from many other MPs.

He got a standing ovation. Saturday is World AIDS Day.

I know how much todays reaction would have meant to 22 year old me. Thank you.

My colleague @lloyd_rm gave a very courageous and moving testimony on being HIV positive ahead of #WorldAIDSDay. LLoyds bravery represents the very best of Labour and I hope his speech helps defy the stigma around HIVhttps://t.co/rAsjjTSOUl

Today @Lloyd_rm made history by being the first MP to speak in the House of Commons about being HIV positive. His bravery and hope will help to raise awareness and tackle stigma, and inspire people across our country and around the world. https://t.co/ODZUvYjfWT

Emotional moment in Commons – Labour MP Lloyd Russell-Moyle close to tears as he tells MPs he is HIV positive, and has been for 9 years. Colleagues surround him in support.

I pay tribute to the dignity showed by friend Lloyd Russell-Moyle in sharing his experience being diagnosed as HIV+ to the House of Commons today. I stand with Lloyd and all those around the world with HIV to end the stigma & ensure access to effective treatment. Solidarity.

Huge respect to @lloyd_rm for doing this. A courageous act that will help tackle the stigma around HIV/AIDS https://t.co/KhDqFp6oQO

Piss poor. Labour benches rise to applaud Lloyd Russell-Moyle after coming out as HIV positive in World Aids day debate. The half dozen Tories in the chamber remain silent

People living with #HIV can do ANY job they choose, including being an MP. Thank you @lloyd_rm for telling the world that you live with HIV. This will combat the considerable #HIVStigma that still exists. It is crucial that it is challenged! https://t.co/8u2UWuaKvE