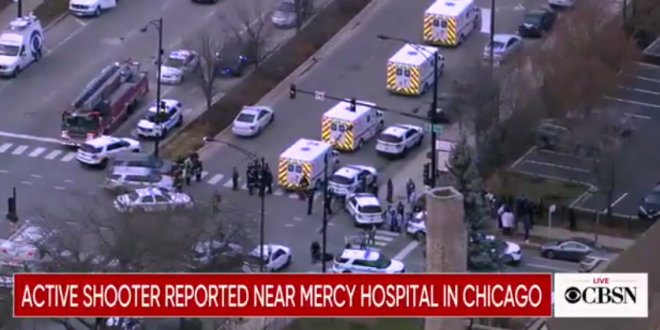 Police were responding to reports of shots fired at Mercy Hospital in Chicago on Monday afternoon. Anthony Guglielmi, chief communications officer for the Chicago Police Department, said there are reports of multiple victims on Twitter Tuesday. One suspect was shot as searches of the area were continuing, authorities said. Mercy Hospital is 26 blocks south of the Chicago Loop.

“I turned around to my right and I see a man shooting someone on the ground”: A man who was waiting for results in Chicago’s Mercy Hospital describes seeing the active shooter there pic.twitter.com/79GCK88vG4

DEVELOPING: Authorities respond to reports of an active shooter near Chicago's Mercy Hospital; there are "reports of multiple victims," @Chicago_Police spokesman says in tweet. pic.twitter.com/MJT0urYikr

A #ChicagoPolice officer has been shot in the active shooter incident at Mercy Hospital. He is in critical condition but receiving excellent care. Please send your prayers. pic.twitter.com/kFfMY1ZmF7

Officers are doing a methodical search of Mercy hospital. At least one possible offender is shot. Please avoid the area of 26th and Michigan