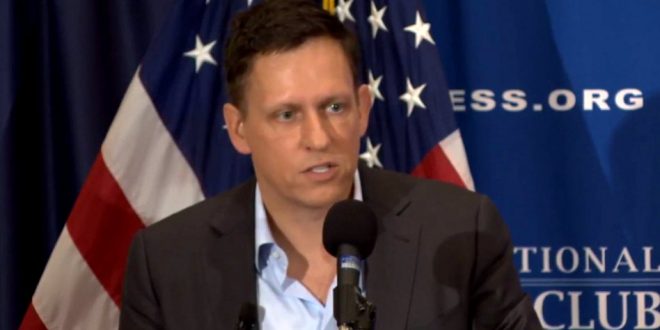 Peter Thiel, the Facebook Inc. board member who helped Donald Trump win the White House and became Silicon Valley’s punching bag in the process, said Thursday that Trump has been “relatively successful” and that he’ll support him in 2020.

The venture capitalist also defended Trump’s sometimes loose relationship with facts. He said unlike the past three U.S. presidents, Trump did not commit the “lie of omission” by failing to discuss contentious topics like immigration and trade. “Trump’s inaccuracies are exaggerations of the truth,” he said.

Questions about Trump’s name-calling and lack of civility were brushed aside. “I don’t think Trump’s nicknames are that nasty,” Thiel said. “They’re powerfully accurate.”

PayPal co-founder and prominent Donald Trump donor Peter Thiel has addressed reports that he uses radical life extension therapies that involve blood transfusions using youthful donors. Mr Thiel said: “I want to publicly tell you that I’m not a vampire. On the record, I am not a vampire.”

When questioned further on the matter, he denied that he has ever injected himself with a “young person’s blood,” a practice that some believe can have a regenerative effect on older people.

In 2016, various media outlets reported that Mr Thiel had links to the radical life extension startup Ambrosia, with Gawker claiming he “spends $40,00 per quarter to get an infusion of blood from an 18-year-old based on research conducted at Stanford on extending the lives of mice.”

Gawker, of course, was sued into oblivion by Thiel.