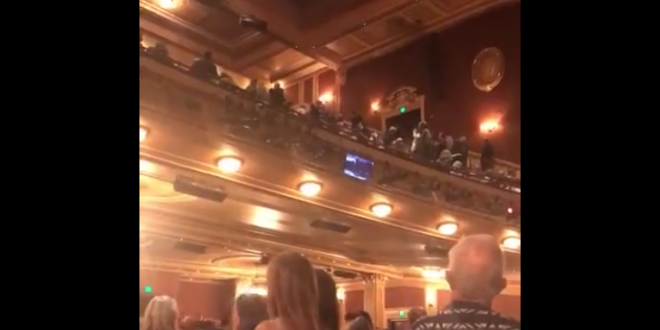 A man shouted a pro-Nazi and pro-Trump salute during a performance of “Fiddler on the Roof” at Baltimore’s Hippodrome Theatre on Wednesday night in an outburst that some audience members feared was the beginning of a shooting.

Audience member Rich Scherr said the outburst happened during intermission. The man, who had been seated in the balcony, began shouting “Heil Hitler, Heil Trump.” Immediately after that, “People started running,” Scherr said. “I’ll be honest, I was waiting to hear a gunshot. I thought, ‘Here we go.’ ”

The man was escorted out a few minutes later and the show continued. But Scherr, 49, said it was hard to focus on the play after that. “My heart was just racing. I didn’t even really pay attention to the second act.”

We cannot pretend not to hear this. There is an emerging crisis in our land. https://t.co/m2CJ1oXbx9

Tell me more about how Trump’s rhetoric has nothing to do with the rise in anti-Semitic hate crimes during his presidency https://t.co/gtu49vLg0p

Sick, sad world. A man stands at intermission of tonight’s performance of Fiddler in Baltimore and yells, “Heil Hitler,” along with pro-Trump references. pic.twitter.com/slDcPwF7re