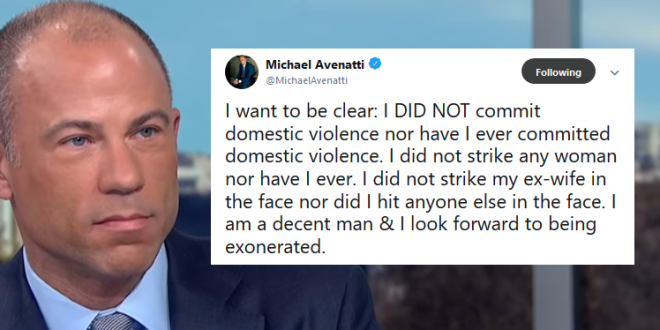 Avenatti Denies Charge: I Have Never Struck A Woman

Michael Avenatti, the lawyer for Stormy Daniels, has denied allegations of domestic violence after his arrest near his ritzy Los Angeles skyscraper apartment. “I have never struck a woman, I never will strike a woman,” Avenatti told reporters Wednesday after being booked and posting $50,000 bail.

Avenatti said he has been an advocate for women’s rights his entire career and is confident that he will be exonerated. Police didn’t immediately disclose details about the arrest incident but Officer Tony Im, an LAPD spokesman, said the victim has visible injuries.

Earlier, he released a statement through his law firm slamming the allegation as “completely bogus” and intended to harm his reputation. The Vermont Democratic Party canceled events planned for Friday and Saturday, where Avenatti was scheduled to speak, and is refunding ticket sales.

Thank you to everyone who has reached out with supportive messages and offers of assistance. It means the world to me. I have always been an advocate of women’s rights and equality & I always will be. I will not be intimidated into stopping my pursuit of justice and what is right

The stmt issued earlier from Christine, my first wife. https://t.co/nNT0hmDu7H

The stmt issued earlier from my second wife Lisa, together with stmts made to @mj_lee of CNN. https://t.co/ZgEsGuHtaS