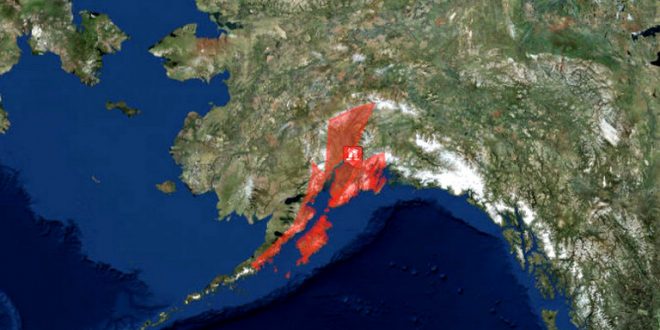 A 7.0 magnitude earthquake has rocked buildings in Anchorage, the U.S. Geological Survey says. A tsunami warning has been issued 30 miles south-west of Palmer, Alaska. There are numerous reports of damage coming in. A magnitude of between 7 and 7.9 is considered a major earthquake that will cause serious damage.

Terrified residents took to social media to share their experiences of the tremor with video posted on Twitter showing people taking cover under tables as light fixtures and furniture rocks back and forth. Another picture showing the aftermath of the quake shows part of the ceiling in a shop collapsed.

BREAKING A powerful earthquake with a preliminary magnitude of 7.0 has struck Alaska, eight miles (13km) north of Anchorage, the largest city in the state, according to the US Geological Survey. https://t.co/xGBeX8oEi4 pic.twitter.com/3WVrMmAnMA

We are getting our first visuals out of Anchorage, Alaska where a major earthquake struck moments ago. pic.twitter.com/GMAFLsla6A

7.2 earthquake here in Anchorage, Alaska. This is a video my dad took from the Minnesota exit ramp from international. 😰😰 pic.twitter.com/1yOGj3yz9q

Previous Acting AG Matt Whitaker Knew About Fraud Complaints Against Scam Outfit, Still Wanted To Do Ads For Them
Next Federal Workers Banned From Discussing Impeachment