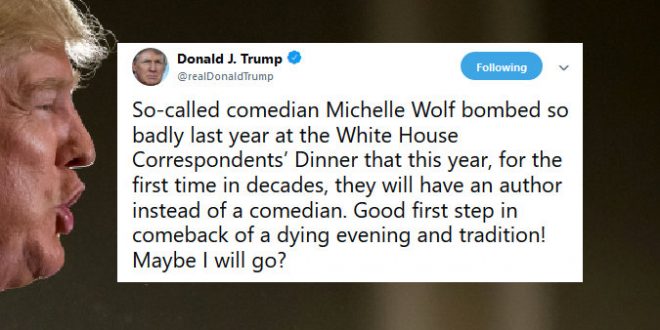 President Donald Trump has hinted that he may attend the next White House Correspondents’ Association (WHCA) dinner after it was announced that an author will be the host.

Trump appeared to delight in the news that the WHCA had named the writer Ron Chernow, rather than a comic as is tradition, as the headline act for the annual dinner due to take place on April 27.

The president has said how much he hated comedian Michelle Wolf’s appearance at this year’s event in which she gave a 20-minute monologue that made fun of him.

So-called comedian Michelle Wolf bombed so badly last year at the White House Correspondents’ Dinner that this year, for the first time in decades, they will have an author instead of a comedian. Good first step in comeback of a dying evening and tradition! Maybe I will go?

I bet you’d be on my side if I had killed a journalist. #BeBest https://t.co/bZ91Cg0QCr

Previous CHATTER AWAY: Overnight Open Thread
Next Giuliani: Trump Will Defy Any Subpoena From Mueller