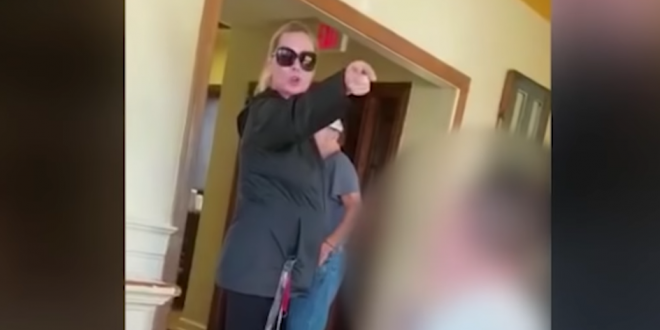 Another white woman was caught on video hurling insults to a group of Latinos, this time at Andy’s restaurant in Lovettsville, Virginia. The woman harassed a Latina woman and her family, visiting from Guatemala after they spoke in Spanish.

“She asked for our passports. She said she knew everyone in the county and told us to leave,” the Latina woman, who asked to remain anonymous, told Telemundo’s Washington D.C., affiliate. “We told her: we’re not speaking with you, we’re speaking among ourselves.”

The unidentified white woman was captured on cellphone video approaching the family and launching an expletive-filled rant. “You don’t freeload in this f—ing country,” the woman can be heard yelling. “You get the f—k out, back to your f—ing country.” The woman claimed the Guatemalan tourists were freeloaders “on America,” according to the video posted by Telemundo.

Later outside the restaurant, the woman continued her rant, saying, “I’m tired of this shit.  You fucking freeload on us!” Loudoun County Sheriff’s Office spokesperson Kraig Troxell said deputies responded to the restaurant over a report of a woman confronting customers.

“The female subject was asked to leave the business by the manager and she complied without any further incident,” said Troxell. No arrests were made. In a Facebook post, the restaurant condemned the actions of the harassing woman, saying she will not be welcomed back at the establishment.