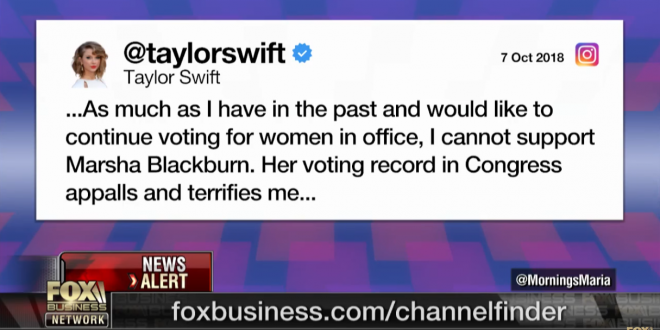 Taylor Swift usually stays out of the political fray, but this year, with just a month to go until midterm elections, the pop superstar is getting involved in a big way.

Swift stunned the pop culture and political worlds Sunday night with a lengthy, impassioned Instagram post in which she endorsed Democrats Phil Bredesen and Rep. Jim Cooper in their Tennessee U.S. Senate and House races, respectively.

“In the past I’ve been reluctant to publicly voice my political opinions, but due to several events in my life and in the world in the past two years, I feel very differently about that now,” Swift wrote. She has 112 million followers on Instagram.

“She voted against equal pay for women. She voted against the Reauthorization of the Violence Against Women Act, which attempts to protect women from domestic violence, stalking, and date rape. She believes businesses have a right to refuse service to gay couples. She also believes they should not have the right to marry. These are not MY Tennessee values,” the singer wrote [about Sen. Marsha Blackburn].

Though the Grammy winner has occasionally voiced support for progressive issues, Swift’s reluctance to speak out on political issues more often has been subject to criticism in the past. The star’s popularity within the alt-Right—and her initial failure to explicitly denounce them—was perceived by many on the Left as a tacit endorsement of Donald Trump. But with Sunday explicitly partisan post, she’s come under fire from the Right.

You just endorsed a Democrat in the Tennessee senate race with a ridiculous statement saying Marsha Blackburn, a woman, is against women

You have absolutely no idea what you are talking about

Your career has never recovered since Kanye ended it

You have no idea what you are talking about

Marsha is a strong woman who will be the next US Senator from Tennessee. https://t.co/J27pRRJvJa

Who runs your socials, Eric?

I do. Unless it misses its mark. Then it’s an intern.

So @taylorswift13 has every right to be political but it won’t impact election unless we allow 13 yr old girls to vote. Still with #MarshaBlackburn

This is the guy telling anyone who will give him airtime that Swift should be quiet. It’s always amusing that all it takes to break their “celebrities should stay out of politics” rule is for one to actually like them. pic.twitter.com/M8oQHlTcmq

Taylor Swift's endorsement of Democrat Phil Bredesen has enraged 4Chan users, who had idolized her as an icon of conservative white womanhood. https://t.co/5HcU9jAEMg pic.twitter.com/Me9xzKb6oI

So… Kanye is MAGA and Taylor Swift is endorsing Democrats in TN. This screening of Interstellar 2 is fascinating. Buy a lottery ticket. Anything is possible in this timeline.