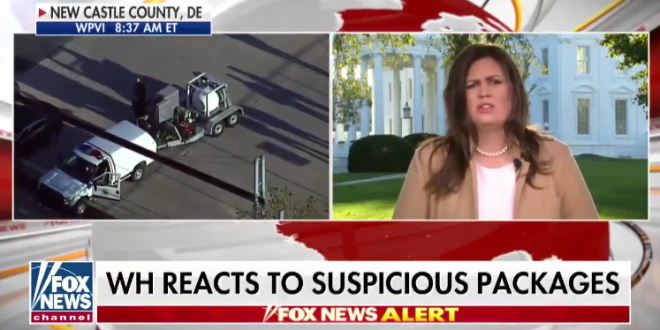 “I think it is absolutely disgraceful that one of the first public statements we heard from CNN yesterday was to put the blame and the responsibility of this despicable act on the president and on me personally,” Sanders said on Fox News.

“I find that disgraceful that that was one of the first statements is that they made this and tried to put the blame on the president,” she said.

.@realDonaldTrump asked Americans “to come together and send one very clear, strong, unmistakable message that acts or threats of political violence of any kind have no place in the USA” Yet you chose to attack and divide. America should unite against all political violence. https://t.co/Dlo3xwHyKi

“If you have a problem with one another let’s voice that, but let’s do so peacefully and let’s do that at the ballot box” –@PressSec pic.twitter.com/KDBK1tjz40

“We condemn violence in all forms, and this is a despicable act and certainly something that should never take place in America” –@PressSec pic.twitter.com/OD1J2V3kqp