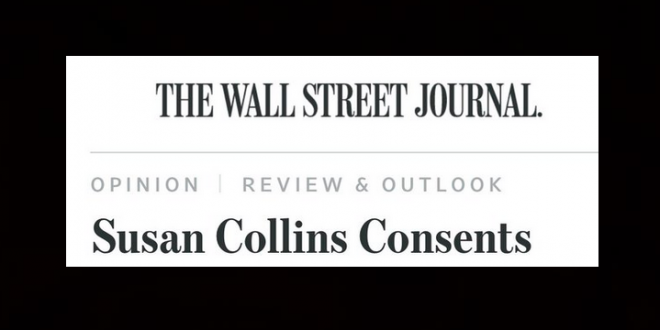 “Susan Collins Consents” reads the headline of the editorial, which WSJ published on Friday evening after Collins on the Senate floor announced she would indeed vote for Kavanaugh after weeks of deliberation.

The text of the editorial makes clear that the “consent” reference is actually tied to the Senate’s role in providing “advice and consent” to the president of the United States on nominations and international treaties.

Still, given the circumstances of Kavanaugh’s nomination — he has been accused of sexual assault by one woman and sexual misconduct by another, accusations he has vehemently denied — the headline is, at the very least, in extremely poor taste. It’s a rape joke.

And @WSJ decides to go with a rape joke pic.twitter.com/ooQAtACBz0

Making a rape joke to own the libs https://t.co/UuUViakgNL

Previous Ted Cruz: My Wife And I Had To Shelter In Place From A “Mob Of Fifteen Screaming Leftist Protesters” [VIDEO]
Next LIVE VIDEO: Senate Makes Final Vote On Kavanaugh, Dozens Of Protesters Arrested Outside Supreme Court