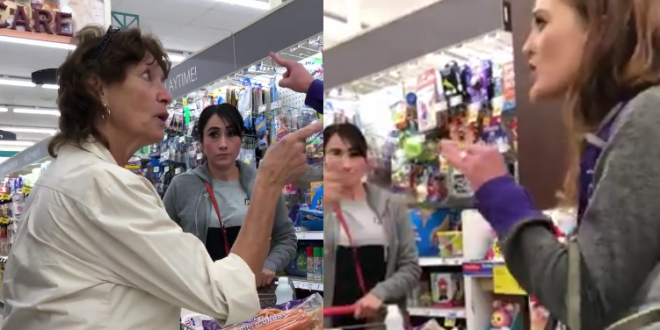 A woman who allegedly harassed two people for speaking Spanish in a Colorado grocery store was confronted by another woman before being arrested in an incident captured on video. The footage, which has been viewed more than 500,000 times since it was posted to Facebook, shows Kamira Trent shouting down Linda Dwire in an aisle of a City Market grocery store in the city of Rifle on Monday afternoon.

“I’m calling the cops. You leave these women alone! Get out!” Trent tells Dwire in front of two women from Mexico, Fabiola Velasquez and Isabel Marin, who had been speaking Spanish to each other. In a call with BuzzFeed News, Dwire maintained that she is not racist and that she was not harassing the women. “It has nothing to do with race. It’s a patriotic thing,” Dwire said. “When people come to my country, they need to love it enough to speak English.”

“You come from a generation that’s destroying this country,” Dwire shouts. “No I do not. I have respect. You do not harass people,” Trent shoots back. “You will lose your country,” Dwire says, pointing her finger at Trent. “You know what, you will lose this country.” Trent, who walks away with the woman further down the aisle, can be heard yelling “you do not harass Hispanic women!” while the woman continues to tell her that she will “lose this country.”

According to interviews with the women involved, Dwire overheard two women from Mexico, Fabiola Velasquez and Isabel Marin, speaking Spanish to each other, and interrupted to ask if the women lived in the United States and whether they liked the country. When the women replied that they did, Dwire told them to learn to speak English, her voice quickly rising as the conversation escalated.

Dwire was arrested and charged with two counts of bias-motivated harassment and is currently out on bond. She maintains, however, that she is not racist, and that she’s just “patriotic.”

“They’d rather have their country here. I don’t mind them coming here as long as they want to be an American and not go on our welfare system,” Dwire said. “When there are so many people that they don’t learn English, that’s what divides our country.”

However, Velasquez, who has been in the country for eight years, said Dwire made them feel like she would hurt them and said if Dwire wasn’t racist, she wouldn’t have cared what language the women spoke.

Previous Grassley: “No Hint Of Misconduct” In New FBI Report
Next Senate Dems “Disagree” With Grassley On FBI Report