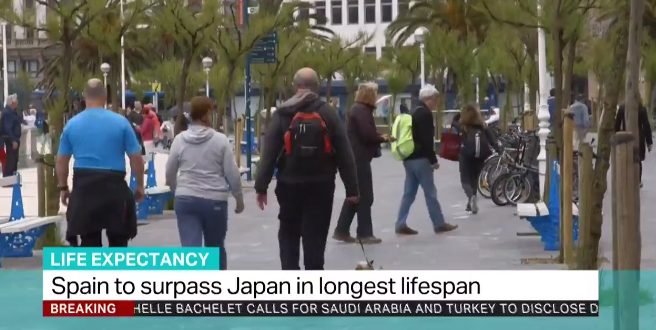 US Projected To Drop To 64th Place In Life Expectancy

Life expectancy in 2040 is set to rise at least a little in all nations but the rankings will change dramatically, with Spain taking the top spot while China and the United States trade places, researchers said Wednesday.

With a projected average lifespan of nearly 85.8 years, Spain — formerly in 4th place — will dethrone Japan, which sits atop the rankings today with a lifespan of 83.7 years, and will drop to 2nd place in 2040.

In the years to come, the biggest threats to our health and longevity will be obesity, high blood pressure and blood sugar, tobacco use and drinking alcohol, according to the Institute for Health Metrics and Evaluation in Seattle, US, which has produced the forecasts.

“Spain does really well in those,” said Dr Christopher Murray, director of the IHME at the University of Washington, “although tobacco is an area where they could be better. But current life expectancy is very good.”

The Spanish, who are expected to have an average lifespan of 85.8 years, do particularly well in terms of diet, he said. Spain’s health ministry funded the Predimed study, the biggest investigation into the benefits of the Mediterranean diet.

More about the study here and here.

A novel study published in @TheLancet models #lifeexpectancy, all-cause mortality, and causes of death forecasts as well as alternative future scenarios for 250 causes between 2016 and 2040 in 195 countries and territories. https://t.co/AQWD58Q2su pic.twitter.com/OUpcW4R7Cm

Spanish people are predicted to have the longest life expectancy in the world by 2040 as a result of their healthy diet, outranking Japan that ranked first in 2016 pic.twitter.com/fs1CAfVr1W