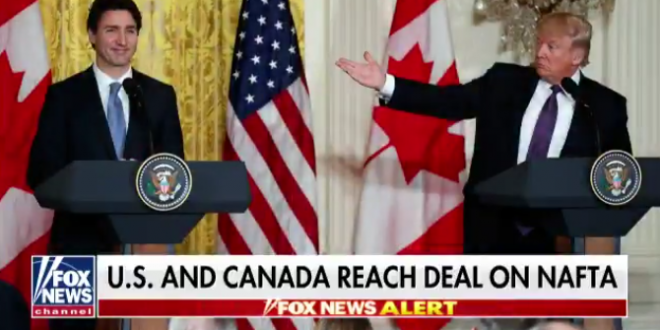 U.S. President Donald Trump is set to sign a successor to the North American Free Trade Agreement that will make modest revisions to a deal he once called a “disaster,” easing uncertainty for companies reliant on tariff-free commerce.

U.S. and Canadian negotiators worked around the clock this weekend to secure an agreement just before a Sunday midnight deadline, allowing leaders from those nations and Mexico to sign the accord by late November.

The 24-year-old NAFTA will now be superseded by the U.S.-Mexico-Canada Agreement, or USMCA, covering a region that trades more than $1 trillion annually.

Just hours before a midnight deadline, the US and Canadian governments agreed to a deal that would allow US farmers greater access to Canada’s dairy market and address concerns about potential US auto tariffs, officials from both countries said.

The agreement with Canada and Mexico — two of the United States’ biggest trading partners — fulfills President Donald Trump’s campaign pledge to renegotiate NAFTA and avoids his threat to exclude Canada if the talks failed. The new deal has a new name: the United States-Mexico-Canada Agreement.

Some experts questioned whether the changes to NAFTA were worth the strain put on relations with Canada by Trump’s threats and brinkmanship during the negotiations. “We have really hurt relationships with our major ally … for the sake of a few gallons of milk,” Jeffrey Rosensweig, a business professor at Emory University, said on CNN.

Late last night, our deadline, we reached a wonderful new Trade Deal with Canada, to be added into the deal already reached with Mexico. The new name will be The United States Mexico Canada Agreement, or USMCA. It is a great deal for all three countries, solves the many……

….deficiencies and mistakes in NAFTA, greatly opens markets to our Farmers and Manufacturers, reduces Trade Barriers to the U.S. and will bring all three Great Nations together in competition with the rest of the world. The USMCA is a historic transaction!

Congratulations to Mexico and Canada!

My original prediction on Trump/NAFTA was that we would end up making some minor changes to the agreement, Trump would declare victory, and we’d move on. That’s what seems to have happened 1/ https://t.co/tTKqA9hOH9

“It’s a good day for Canada,” says PM @JustinTrudeau, as he leaves the Office of the Prime Minister and Privy Council after agreeing to #NAFTA replacement #USMCA that will include Mexico pic.twitter.com/zBF2yqr6pT