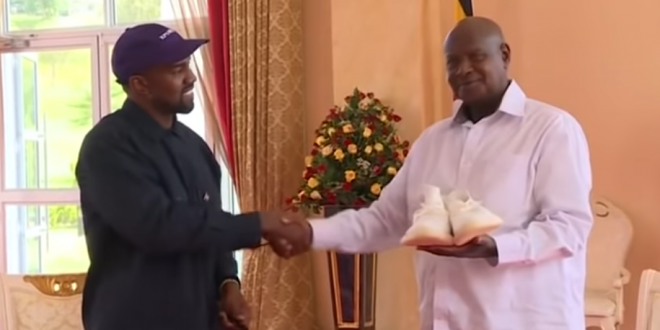 Kanye West handed Uganda’s president a pair of his autographed sneakers on Monday during a visit to the East African nation in which the rapper is said to be recording music in a tent. The 74-year-old President Yoweri Museveni said he and West held “fruitful discussions” about promoting tourism and arts.

The couple has been vacationing in a national park in Uganda while excited tourism officials see the visit as an endorsement of the country’s tourism potential. The government recently imposed a tax on social media and the constitution was changed to remove an age limit on the presidency, leading some to worry that Museveni plans to rule for life.

In 2014, Museveni signed the Uganda Anti-Homosexuality Act, an earlier version of which was called the “Kill The Gays” bill by the Western media. The version signed by Museveni substituted life in prison for the death penalty. The latter version was ruled unconstitutional on a technicality several months later. Life in prison remains a possible sentence for gay males in Uganda.

I welcome American entertainment stars Kanye West and @KimKardashian to Uganda. I held fruitful discussions with the duo on how to promote Uganda’s tourism and the arts. I thank Kanye for the gift of white sneakers. Enjoy your time in Uganda. It is the true Pearl of Africa. pic.twitter.com/BO0iD0sFCP

Previous REPORT: Saudi Arabia To Admit Killing Critic Journalist As The Result Of An Interrogation That “Went Wrong”
Next NYPD To Charge Nine “Proud Boys” Members With Rioting And Assault For Homophobic Attacks [VIDEO]