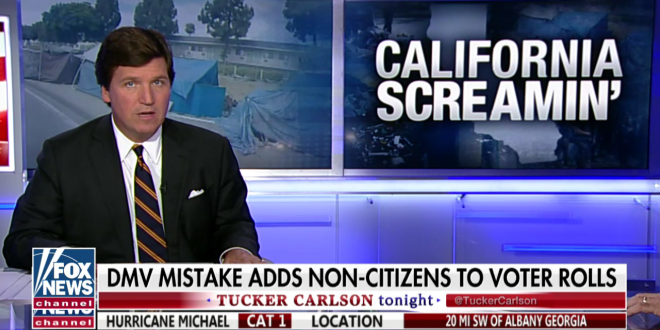 Tucker Carlson: California Is So Disgusting, It’s The Kind Of Place Trump Wouldn’t Want Immigration From

“Tonight, we bring you another installment in our ongoing story about California, and its long dissent from a middle class utopia, an inspiration to the rest of the world, to the kind of place that Donald Trump wouldn’t want immigration from. For example, third world countries are known for election fraud. California’s DMV has just admitted to accidentally registering more than 1,000 — 1,500 noncitizens, to vote. Los Angeles, meanwhile, is grappling with an epidemic of typhus — in this country, typhus. In San Francisco, an app called ‘Snapcrap’ — disgusting, but true, — has just launched to help residents there report local waste on the sidewalk to the government.” – Tucker Carlson, on last night’s show.

Previous CHATTER AWAY: Overnight Open Thread
Next Melania: I’m The Most Bullied Person In The World