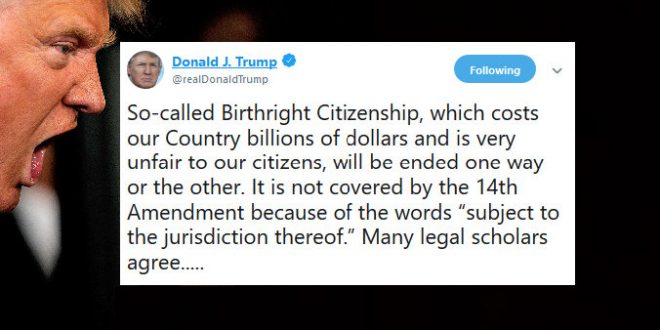 President Trump vowed Wednesday to push forward with his call to end birthright citizenship, despite a backlash from legal scholars and some prominent members of his own party to his pledge a day earlier to take executive action on the matter. In morning tweets, Trump said he would end the 150-year-old practice “one way or the other,” seeming to leave the door open to either congressional action or a constitutional amendment, which many legal scholars say would be necessary to achieve his aims. Trump also said the issue would ultimately be decided by the Supreme Court.

So-called Birthright Citizenship, which costs our Country billions of dollars and is very unfair to our citizens, will be ended one way or the other. It is not covered by the 14th Amendment because of the words “subject to the jurisdiction thereof.” Many legal scholars agree…..

….Harry Reid was right in 1993, before he and the Democrats went insane and started with the Open Borders (which brings massive Crime) “stuff.” Don’t forget the nasty term Anchor Babies. I will keep our Country safe. This case will be settled by the United States Supreme Court!

The World is using our laws to our detriment. They laugh at the Stupidity they see!

Previous Jews For Jesus “Rabbi” That Opened Pence Event Had Been Stripped Of His Ordination 15 Years Ago For Libel
Next KENTUCKY: Expo Center Mulls Ban On “Items Of Hate” After Gun Show Vendors Sell Nazi And KKK Outfits