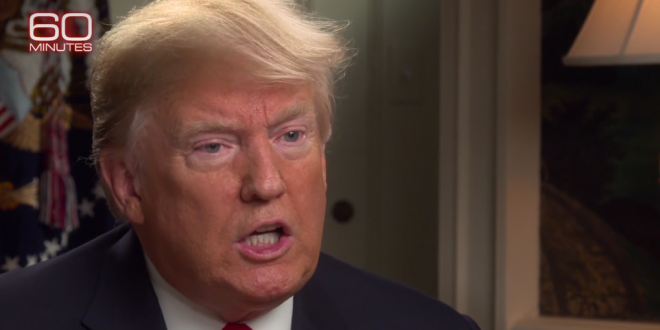 President Donald Trump said in an interview with 60 Minutes that the Saudis could be behind the disappearance of missing journalist and Washington Post contributor Jamal Khashoggi, and if so, the U.S. would inflict “severe punishment.”

In a clip broadcast on “CBS This Morning,” Mr. Trump said there is a lot at stake “and maybe especially so because this man was a reporter.”

Mr. Trump said the Saudis denied “in every way you can imagine” having anything to do with Khashoggi’s disappearance when his son-in-law Jared Kushner spoke with Saudi Arabia’s crown prince. But Mr. Trump said the country may still be responsible and an investigation is ongoing. “Could it be them? Yes,” the president said.

Stahl asked Trump about his options to retaliate against the Saudis, including possibly imposing economic sanctions against the oil-rich desert kingdom, as a bipartisan group of senators has proposed.

“Well, it depends on what the sanction is,” Trump replied. “I’ll give you an example. They are ordering military equipment. Everybody in the world wanted that order. Russia wanted it, China wanted it, we wanted it. We got it, and we got all of it, every bit of it.”

Asked if he would cut off that order, Trump hesitated. “Well, I’ll tell you what I don’t want to do. Boeing, Lockheed, Raytheon, I don’t want to hurt jobs. I don’t want to lose an order like that. And you know what, there are other ways of punishing, to use a word that’s a pretty harsh word, but it’s true.”

Trump’s hesitation to strike back at the kingdom reflects close ties the White House has nurtured with the nation’s de facto ruler, Crown Prince Mohammed bin Salman, and his administration’s acquiescence to other Saudi actions that have drawn international condemnation.

Under Trump, the U.S. has continued to back a Saudi bombing campaign against Houthi rebels in neighboring Yemen that’s killed thousands of civilians, providing American logistical support and weapons.

Even as senators pushed for sanctions against the Saudis if the murder allegations prove true, Trump has said only that he’d take unspecified action. “He went in and it doesn’t look like he came out,” the president observed in a Fox News interview.