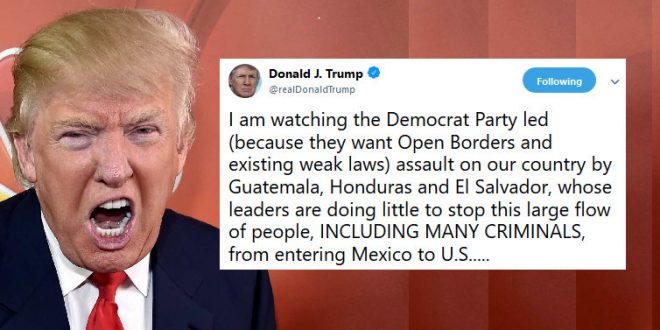 Trump Threatens To Use Military To Stop Migrants

President Trump on Thursday warned that he may take military action to stop immigrants from crossing the southern border into the U.S. Trump also blamed Democrats for “weak laws” on immigration, and said that the “assault” on the U.S. from illegal immigration is “far more important” to him than trade or the new USMCA trade pact with Mexico and Canada. The tweets come as an immigrant caravan of more than 4,000 people moves north from Honduras toward the US-Mexico border.

I am watching the Democrat Party led (because they want Open Borders and existing weak laws) assault on our country by Guatemala, Honduras and El Salvador, whose leaders are doing little to stop this large flow of people, INCLUDING MANY CRIMINALS, from entering Mexico to U.S…..

….In addition to stopping all payments to these countries, which seem to have almost no control over their population, I must, in the strongest of terms, ask Mexico to stop this onslaught – and if unable to do so I will call up the U.S. Military and CLOSE OUR SOUTHERN BORDER!..

….The assault on our country at our Southern Border, including the Criminal elements and DRUGS pouring in, is far more important to me, as President, than Trade or the USMCA. Hopefully Mexico will stop this onslaught at their Northern Border. All Democrats fault for weak laws!