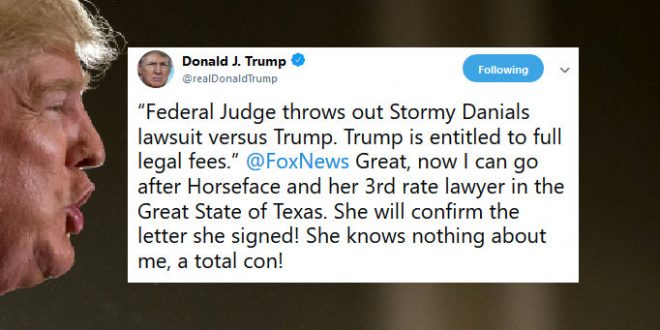 Remember Trump’s attack on Carly Fiorina back in 2015?

“Look at that face! Would anyone vote for that? Can you imagine that, the face of our next president?” Trump reportedly bellowed while watching his Republican presidential rival on the news. “I mean, she’s a woman, and I’m not supposed to say bad things, but really, folks, come on. Are we serious?”

“Federal Judge throws out Stormy Danials lawsuit versus Trump. Trump is entitled to full legal fees.” @FoxNews Great, now I can go after Horseface and her 3rd rate lawyer in the Great State of Texas. She will confirm the letter she signed! She knows nothing about me, a total con!

Mushroom Dick and Horseface: A Tale of Romance

.@realDonaldTrump – tens of millions of Americans are tired of your fraud, lies, and corruption. They are equally tired of your attacks on women, especially the ones who you have had sex with while cheating on your wives. We (and the UN) are laughing AT YOU, not with you. #Basta

Previous The “Biggest Stadium In Texas” Trump Can Find For His “Major Rally” For Ted Cruz Only Seats 8000 People
Next Tucker Carlson: I Can’t Go Out To Restaurants Anymore Because People Keep Screaming “Fuck You” At Me