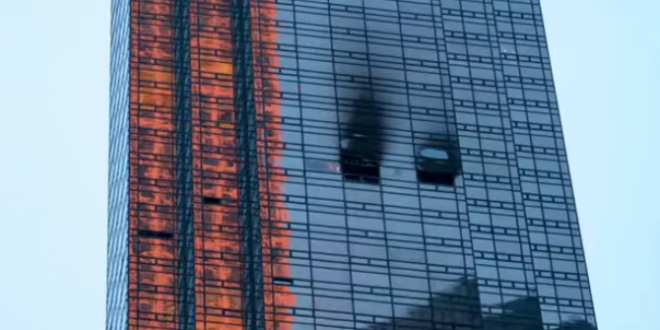 The Trump Organization has filed a lawsuit seeking $90,000 in unpaid common charges and fees from a Trump Tower resident– six months after he died in a fire that engulfed his Fifth Avenue apartment.

The board of Trump Tower Condominium, through Trump Organization lawyer Sonja Talesnik, filed the suit in Manhattan Supreme Court late Tuesday against the estate of Todd Brassner and his Florida heirs.

The 67-year-old former art dealer first defaulted on his common charges in 2015 and had recently filed for bankruptcy, according to reports. He died shortly after first responders rushed him to a nearby hospital.

From an April report by the New York Times:

Friends of Mr. Brassner said he had been trying to move since the election of President Trump in 2016, which brought increased security and activity to the building on Fifth Avenue in Manhattan, but he could not sell his 50th-floor apartment, which he estimated to be worth $2.5 million in 2015.

“It haunts me,” said Stephen Dwire, 67, a musician and music producer who had been friends with Mr. Brassner since they were 14-year-olds in Harrison, N.Y., in Westchester County. “He said, ‘This is getting untenable,’” Mr. Dwire said. “It was like living in an armed camp. But when people heard it was a Trump building, he couldn’t give it away.”

Previous CHATTER AWAY: Overnight Open Thread
Next Trump Threatens To Use Military To Stop Migrants