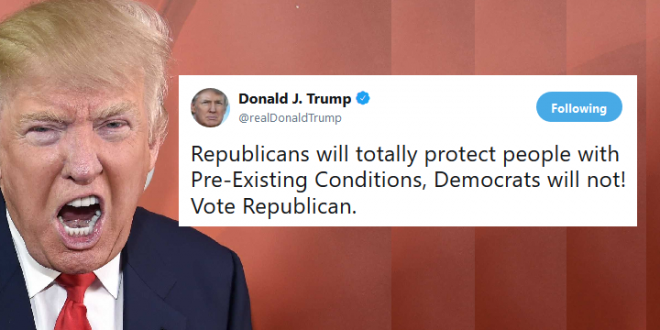 As the midterms approach, President Donald Trump has increasingly pitched his party to voters by embracing a wildly popular element of the health care law that the president and congressional Republicans spent the last two years trying to repeal. “Republicans will always protect people with pre-existing conditions,” Trump said on Saturday in Nevada.

This is false. The Trump administration is backing a Republican-led lawsuit that claims Obamacare’s protections for pre-existing conditions are illegal. If the suit succeeds, insurers would be able to start denying coverage to those people.

The White House has not proposed alternative legislation that would offer those with pre-existing conditions the protections Obamacare gives consumers. In the first few years after Obamacare was passed, Republicans voted to repeal Obamacare more than 54 times. And that was just the start.

Republicans will totally protect people with Pre-Existing Conditions, Democrats will not! Vote Republican.

Previous The Mooch: Trump Is Lying About Being A Nationalist, He Just Says That Because He Wants To Upset People
Next BREAKING: Bomb Mailed To Clintons’ New York Home