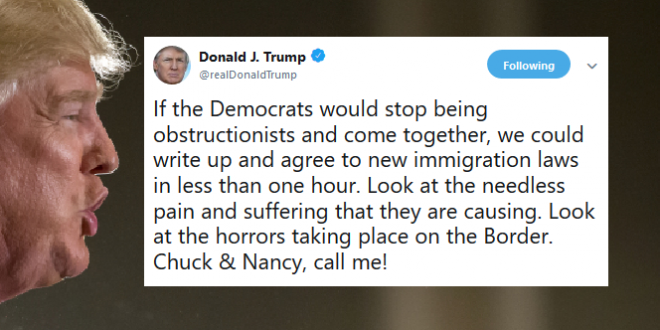 The below happened just last night:

On Friday while Trump was campaigning in Arizona, migrants burst through a Guatemalan border fence and started to stream into Mexican territory, rushing a phalanx of police with riot shields. About 50 pushed through before officers unleashed pepper spray and the rest retreated.

Asked what evidence he had that they were “hardened criminals,” Trump told a reporter at a defense roundtable in Scottsdale: “Oh please. Please. Don’t be a baby.”

If the Democrats would stop being obstructionists and come together, we could write up and agree to new immigration laws in less than one hour. Look at the needless pain and suffering that they are causing. Look at the horrors taking place on the Border. Chuck & Nancy, call me!