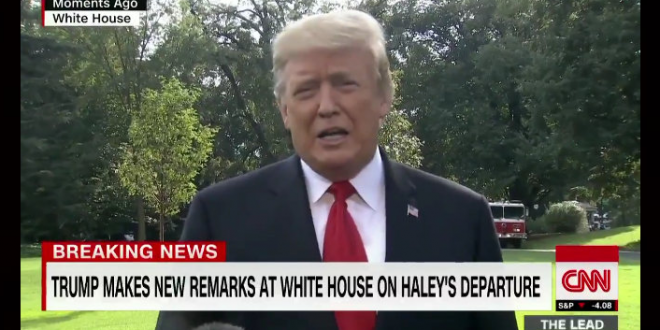 Trump: Ivanka Would Be “Dynamite” As Ambassador

President Trump said Tuesday that his daughter Ivanka would be “dynamite” as an ambassador to the United Nations, but conceded that he would be accused of nepotism if he appointed her to replace outgoing Ambassador Nikki Haley.

“I think Ivanka would be incredible,” Trump told reporters as he prepared to depart the White House for a campaign rally in Iowa. “You’d be accused of nepotism even though I’m not sure there’s anybody more competent in the world,” Trump added.

“Dina is certainly a person I would consider, and she is under consideration,” Trump on Dina Powell to UN. On Ivanka: “It has nothing to do with nepotism. But the people who know know that Ivanka would be dynamite. But then I’d be accused of nepotism if you can believe it.”

“There’s nothing to do with nepotism but the people that know, know that Ivanka would be dynamite,” says President Trump on rumors his daughter Ivanka is under consideration to replace Nikki Haley as US Ambassador to the UN https://t.co/BWKo3fOKhR pic.twitter.com/ylfMDx0oAF