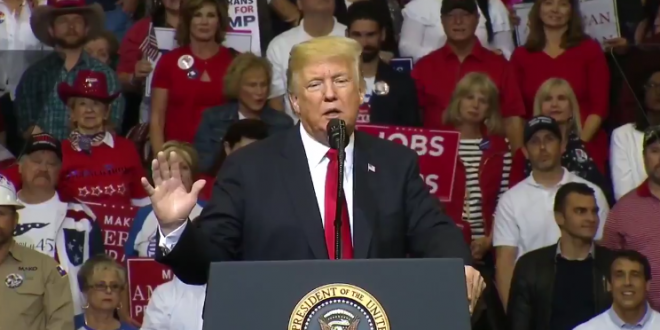 Trump: “I Am A Nationalist, Use That Word” [VIDEO]

President Donald Trump on Monday evening proudly asserted that he is a “nationalist” — a designation some of his fiercest critics have previously wielded against him as an attack on what they deem nativist policy pursuits by his administration.

“You know, they have a word, it sort of became old-fashioned. It’s called a nationalist,” Trump said at a campaign event in Houston, where he rallied voters to support Sen. Ted Cruz (R-Tex.) in November’s midterm elections.

Adolf Hitler: “I am a Nationalist.”

Donald Trump: “I am a Nationalist.”

Wake the fuck up America. This is no longer a circus or a bad reality TV show. This is a full on fascist take over of our country and November 6th is our last best chance to stop it. #VoteBlueToSaveAmerica

Trump is a “nationalist,” except when he lets the Russians, North Koreans, and Saudis tell him how to act. Tough guy in front of a crowd of fans, but not when sitting next to dictators. https://t.co/a6WC0nxrcX

Trump is now coming out full-blown fascist and white supremacist with the “I’m a nationalist” line.

Expect his followers to join in, even create a hashtag.

He just came out