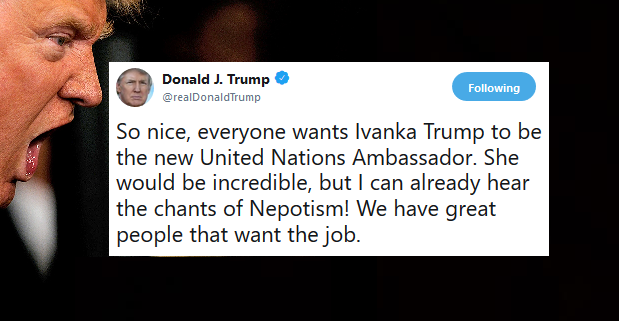 Citing no one, this morning Glorious Leader proclaimed that everyone wants his daughter to replace Nikki Haley as US ambassador to the United Nations. Meanwhile there’s this:

Former deputy national security adviser Dina Powell told the White House on Thursday that she’s not interested in serving as the next U.N. ambassador, a person familiar with the conversation told The Associated Press.

President Donald Trump had said the Goldman Sachs executive was on his shortlist of five people to replace outgoing ambassador Nikki Haley, who surprised many when she announced this week that she planned to depart at the end of the year.

But Powell spoke to the president on Thursday and asked that her name be removed from consideration, according to the person, who was not authorized to speak publicly about private conversations and spoke to the AP on condition of anonymity.

So nice, everyone wants Ivanka Trump to be the new United Nations Ambassador. She would be incredible, but I can already hear the chants of Nepotism! We have great people that want the job.

Ivanka has zero relevant experience except what she’s accumulated through her current job at the White House, which she only has because she’s the president’s daughter. https://t.co/UXb0L2qf8j