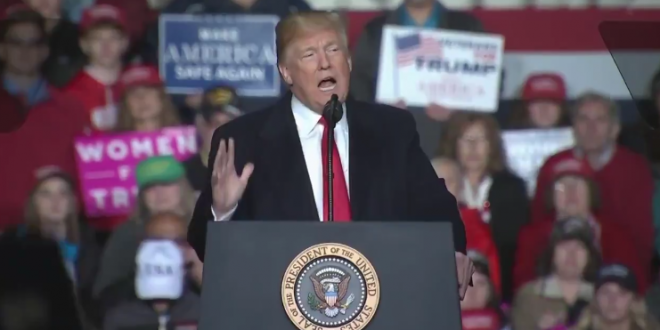 Attendants at a Trump rally in Wisconsin on Wednesday had apparently not paid attention to the President’s plea for unity earlier in the day, as they erupted in a “lock her up” chant mere hours after a bomb was mailed to Hillary Clinton’s home.

The raucous crowd in Mosinee, Wis., exploded in the familiar anti-Clinton diatribe after GOP Senate candidate Leah Vukmir went after the former secretary of state for supposedly being “crooked.”

Minutes later, President Trump took the stage and — without a hint of irony — called on “those engaged in the political arena” to “stop treating political opponents as being morally defective.” “Have to do that,” said a teleprompter-reading Trump, who has made personal insults against political opponents a cornerstone of his presidency.

Well, there you have it … Right after I ponder whether @realDonaldTrump will change his rhetoric in wake of pipe bomb attacks, we cut to tonight’s rally in Wisconsin where Trump supporters are already chanting “Lock Her Up” … pic.twitter.com/tcBjPHzbtn

President Trump said the media should set a “civil tone” following a series of bomb scares, taking no responsibility for the national political environment as he spoke at a rally in Wisconsin https://t.co/rJ6FbQa3Zp pic.twitter.com/w21NNB3EmI

“Do you see how nice I’m behaving tonight? Have you ever seen this? We’re all behaving very well, and hopefully, we can keep it that way. We’re gonna keep it that way,” Trump says at a rally in Wisconsin pic.twitter.com/lGCzeDGP3B