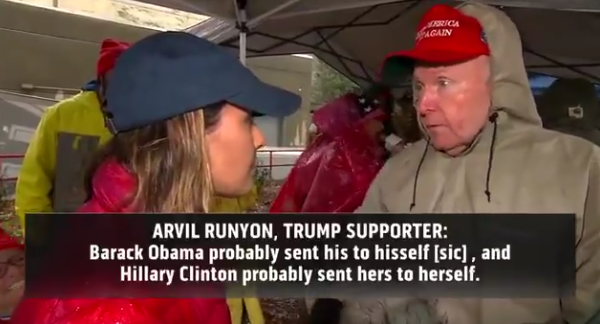 Trump Cultist: Obama And Hillary Sent The Bombs To Themselves To Bring People To Their Side [VIDEO]

A Trump supporter who attended Friday evening’s rally in Charlotte, N.C., said he thinks former President Barack Obama and Secretary of State Hillary Clinton sent themselves bombs in order to score political capital for the Democrats ahead of the midterm elections.

“Barack Obama probably sent his to hisself, and Hillary Clinton probably sent hers to herself,” Arvil Runyon said. He said the man arrested earlier in the day, Cesar Altieri Sayoc Jr., for his suspected role in mailing out the explosives was “probably not” behind the act.

Asked what the upside would be for prominent Democrats to send themselves the bombs, Runyon replied, “Trying to bring people — feeling — over to their side.”