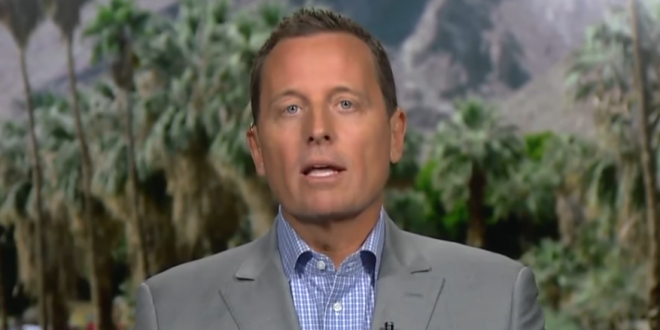 President Donald Trump is now seriously considering Richard Grenell, the controversial U.S. ambassador to Germany, to replace Nikki Haley at the United Nations, according to three people familiar with the matter.

Grenell met with officials at the White House last week to discuss the job, according to two administration officials.

At a separate White House meeting on Wednesday, several members of the president’s national security team mentioned Grenell’s name when asked to recommend their favored candidates for the U.S. ambassador to the U.N. position, two other administration officials said.

Grenell is very tight with John Bolton, for whom he was spokesman when Bolton was UN Ambassador under George W. Bush.

Ambassador Niki Haley did a great job as U.S Ambassador to the UN. @RealDonaldTrump would do very well to appoint the Bold & Brilliant @MicheleBachmann as Niki’s successor.

Nikki, not Niki. I would think you of all people would not be so frugal with your Ks.