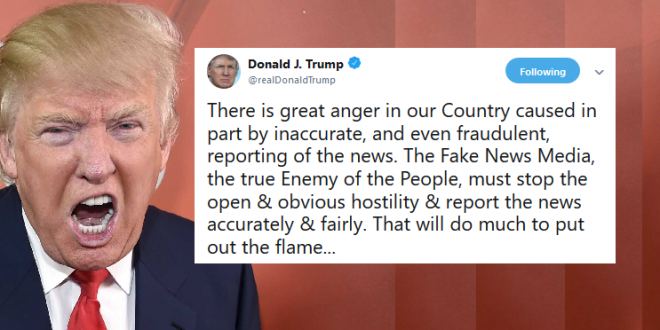 President Donald Trump blamed “fake news” for political division and hatred felt across the United States, following a shooting at a Pittsburgh synagogue that is being prosecuted as a hate crime.

Trump wrote that “fake news” is “doing everything in their power to blame Republicans, Conservatives” and him for political divisions felt across the country.

Trump’s tweets comes just a day after a shooting in a Pittsburgh synagogue left 11 people dead in what has been called the “deadliest attack on the Jewish community in the history of the United States” by the Anti-Defamation League.

The Fake News is doing everything in their power to blame Republicans, Conservatives and me for the division and hatred that has been going on for so long in our Country. Actually, it is their Fake & Dishonest reporting which is causing problems far greater than they understand!

There is great anger in our Country caused in part by inaccurate, and even fraudulent, reporting of the news. The Fake News Media, the true Enemy of the People, must stop the open & obvious hostility & report the news accurately & fairly. That will do much to put out the flame…

….of Anger and Outrage and we will then be able to bring all sides together in Peace and Harmony. Fake News Must End!

Just days after we were forced to evacuate our NYC offices here at CNN because a bomb was sent, Trump takes to Twitter to call the media the “true Enemy of the People” and says, “Fake News Must End!” pic.twitter.com/YGCvn4Qvxv

The bombing suspect, who was an obsessed Trump supporter, repeatedly called CNN “the enemy America” on Twitter – echoing the president’s rhetoric – before he sent his bombs. Today, the president calls the media “the true Enemy of the People.” https://t.co/BnrdDrUJYd

Is there any difference between a pipe bomb sent to CNN and a tweet from Trump calling the media the ‘true enemy of the people’ ?

Both want to put an end to journalism

“The true enemy of the people…” Trump advisor @KellyannePolls just moments ago claimed on CNN that the president’s words have been “very moving and uplifting” https://t.co/Q0flfYGrXm

And the President of the United just called the press “the enemy of the people.” Again.

After a cold blooded massacre in a synagogue and the arrest of a bomber who targeted Trump’s critics.

America is better than this.

Previous PITTSBURGH: Jewish Group Tells Trump He Will Not Be Welcome There Until He Denounces White Nationalism
Next Gab Goes Offline After GoDaddy Gives Them The Boot