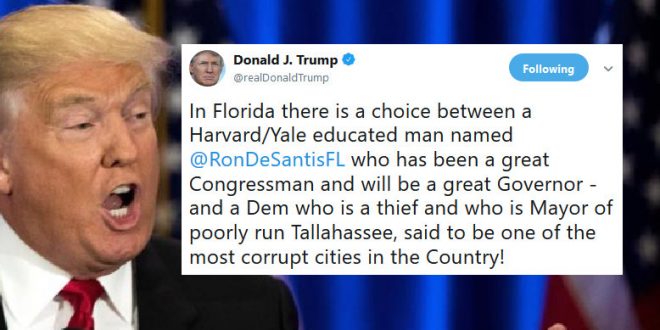 President Donald Trump attacked Democratic Florida governor candidate Andrew Gillum on Monday as a “thief,” and implied his lack of education as compared to the Republican candidate, Ron DeSantis. Gillum attended Florida A&M University, where he majored in political science. The education jab seems to be a variation of Trump’s favorite criticism of his black critics: questioning their intelligence.

In Florida there is a choice between a Harvard/Yale educated man named @RonDeSantisFL who has been a great Congressman and will be a great Governor – and a Dem who is a thief and who is Mayor of poorly run Tallahassee, said to be one of the most corrupt cities in the Country!

Donald Trump and his family for years falsified receipts to defraud tenants and the US government https://t.co/SvznhBRmWG Trump cheated hundreds of carpenters, painters, dishwashers of money he owed them https://t.co/ebw9iwjliU https://t.co/UAlsAxvdpD

Trump opened his presidency by paying a $25 million settlement to students he had defrauded. https://t.co/otaqHNO4wt Who is the “thief”? https://t.co/cAkD5V3oiQ

There’s no evidence Andrew Gillum is a thief. That’s the first time Trump has called someone a thief on Twitter. Gillum is a Black man. pic.twitter.com/sfNUpceDOF