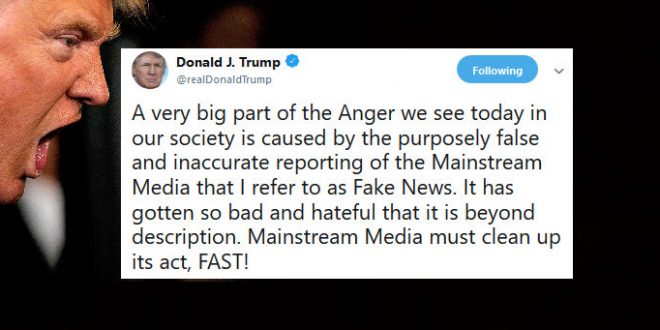 Authorities said on Wednesday the pipe bombs mailed to CNN and prominent Democrats were packed with shards of glass and were intercepted. None of the seven bombs detonated, and nobody was hurt as authorities in New York, Washington, D.C., Florida and California seized the suspicious packages. Thursday morning, President Donald Trump blamed the “anger we see today in our society” on “the purposely false and inaccurate reporting of the Mainstream Media.”

A very big part of the Anger we see today in our society is caused by the purposely false and inaccurate reporting of the Mainstream Media that I refer to as Fake News. It has gotten so bad and hateful that it is beyond description. Mainstream Media must clean up its act, FAST!

Trump blames the victims. Says nothing about the person making the bombs. https://t.co/7o1l2kpjTe

The so-called experts on Trump over at the New York Times wrote a long and boring article on my cellphone usage that is so incorrect I do not have time here to correct it. I only use Government Phones, and have only one seldom used government cell phone. Story is soooo wrong!