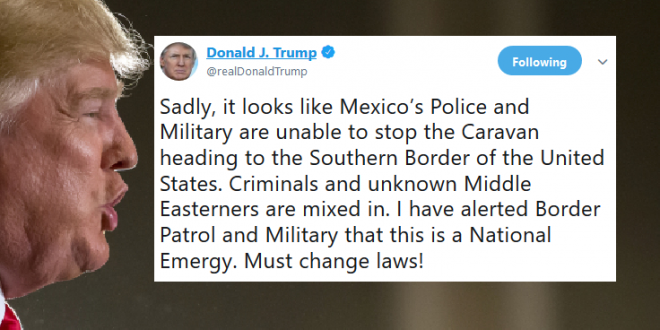 President Trump said Monday that the Democrats are to blame for the caravan of several thousand migrants that’s making its way through Mexico to the southern U.S. border. More than 7,000 migrants broke through Mexico’s southern border and continued on their trek to the United States. Trump said he told the military and U.S. Border Patrol that the caravan headed to the U.S.-Mexican border is now a national emergency.

Every time you see a Caravan, or people illegally coming, or attempting to come, into our Country illegally, think of and blame the Democrats for not giving us the votes to change our pathetic Immigration Laws! Remember the Midterms! So unfair to those who come in legally.

Sadly, it looks like Mexico’s Police and Military are unable to stop the Caravan heading to the Southern Border of the United States. Criminals and unknown Middle Easterners are mixed in. I have alerted Border Patrol and Military that this is a National Emergy. Must change laws!