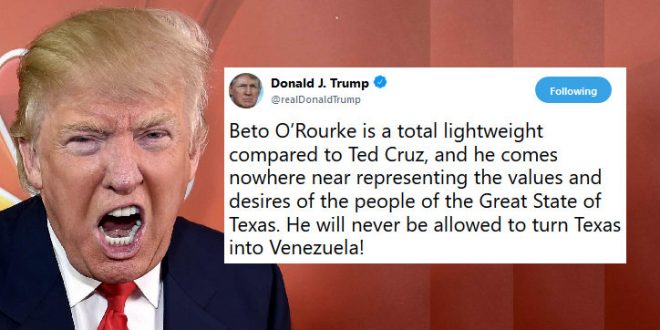 Glorious Leader is parroting last week’s line from the same man who once called him a “compulsive liar” and a “sniveling coward.” Today’s attack was surely spawned by what Beto said last night.

Beto O’Rourke, an El Paso congressman giving up his seat to challenge Republican Sen. Ted Cruz, had previously suggested that he’d support impeaching the president over alleged collusion with Russia and obstruction of justice. But he went further while appearing at a CNN town hall from the U.S.-Mexico border town of McAllen, saying that even as members of Congress wait for more evidence to emerge during federal investigations, “I do think there’s enough there for impeachment.”

Cruz has accused O’Rourke of being the only Democratic Senate candidate in the nation to support impeachment. At least one other, California state Sen. Kevin de Leon, who is challenging U.S. Senator Dianne Feinstein, has said he too would vote to do so. Still, it’s a position that most candidates from both parties have avoided. Even O’Rourke conceded to moderator Dana Bash, “I know that this not politically easy or convenient to talk about.”

Beto O’Rourke is a total lightweight compared to Ted Cruz, and he comes nowhere near representing the values and desires of the people of the Great State of Texas. He will never be allowed to turn Texas into Venezuela!