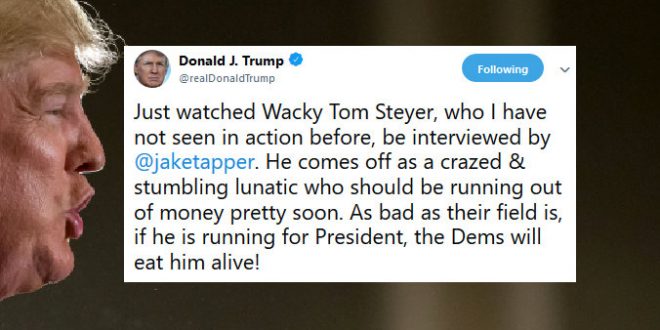 House Majority Leader Kevin McCarthy posted and later deleted a tweet last week that suggested three Jewish, billionaire Democratic donors were attempting to “buy” the 2018 midterm elections. Twitter users quickly condemned McCarthy’s claim, saying it was insensitive given the fact that it came just one day after authorities intercepted what appeared to be a pipe bomb sent to Soros’ New York home.

Asked about McCarthy’s tweet on Soros, Steyer and Bloomberg, California Democratic Rep. Adam Schiff, who is Jewish, said he wasn’t sure what to make of it, but added that he thought the attacks on Soros in particular are driven by his Jewish faith.

Steyer said in an interview on the same program that he interpreted McCarthy’s statement as “a straight-up anti-Semitic move. I think that that is a classic attempt to separate Americans. I think that absolutely falls into the category of what I’m describing as political violence. And I believe that what we are looking for in America is something completely different from that.”

Majority Leader Kevin McCarthy posted this tweet AFTER a bomb was sent to Soros’ house. Up until a couple of minutes ago it was pinned to the top of his profile. pic.twitter.com/FEeKoPolHL

Just watched Wacky Tom Steyer, who I have not seen in action before, be interviewed by @jaketapper. He comes off as a crazed & stumbling lunatic who should be running out of money pretty soon. As bad as their field is, if he is running for President, the Dems will eat him alive!

Tom Steyer was one of the Democrats targeted with a pipe bomb by a crazed Trump supporter. Three days later, Trump is back to calling Steyer a “lunatic” on Twitter. https://t.co/p88s8QXCce

Tom Steyer responds to Rep. Kevin McCarthy’s now-deleted tweet suggesting three Jewish, billionaire Democratic donors were attempting to buy the 2018 election: “That seems to me like a straight-up anti-semitic move. I think that is a classic attempt to separate Americans” pic.twitter.com/dVWz3kSncO