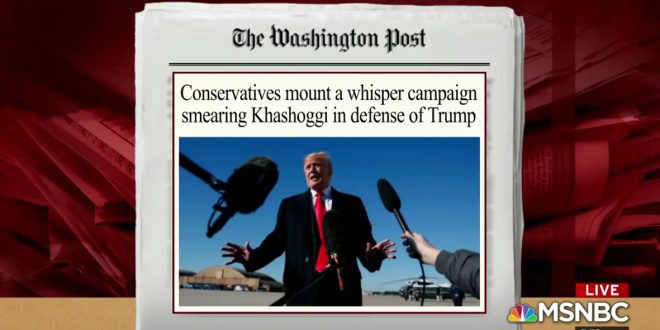 Hard-line Republicans and conservative commentators are mounting a whispering campaign against Jamal Khashoggi that is designed to protect President Trump from criticism of his handling of the dissident journalist’s alleged murder by operatives of Saudi Arabia — and support Trump’s continued aversion to a forceful response to the oil-rich desert kingdom.

In recent days, a cadre of conservative House Republicans allied with Trump has been privately exchanging articles from right-wing outlets that fuel suspicion of Khashoggi, highlighting his association with the Muslim Brotherhood in his youth and raising conspiratorial questions about his work decades ago as an embedded reporter covering Osama bin Laden, according to four GOP officials involved in the discussions who were not authorized to speak publicly.

“Khashoggi was tied to the Muslim Brotherhood,” Fox News anchor Harris Faulkner asserted on Thursday’s highly rated “Outnumbered” show. “I just put it out there because it is in the constellation of things that are being talked about.” Faulkner then dismissed another guest who called her claim “iffy.”

The murmurs have begun to “flare into public view” as conservative media organizations and personalities — Rush Limbaugh, Front Page, Donald Trump Jr., and a sanitized version on Fox News, to name a few — “have amplified the claims, which are aimed in part at protecting Trump as he works to preserve the U.S.-Saudi relationship and avoid confronting the Saudis on human rights.”

Previous Fiorina: Trump Hit A “New Low” With Horseface Tweet
Next Georgia: 107K Voters Purged Under “Use It Or Lose It”