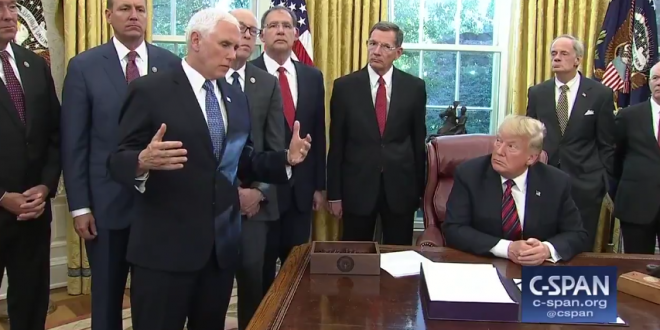 Trump Admits There’s No Proof Middle Easterners Are In Migrant Caravan, But Says There COULD Be [VIDEO]

President Trump on Tuesday acknowledged that he has no proof that people of Middle Eastern descent have joined a large migrant caravan moving toward the U.S.-Mexico border, tempering a claim he has made in recent days.

“There’s no proof of anything. But there could very well be,” Trump said in remarks in the Oval Office Tuesday afternoon.

The president maintained that he has “very good information” from Border Control and other officials that they’ve “intercepted many people from the Middle East” — both “good ones and bad ones” — in recent years. “They say it happens all the time from the Middle East,” Trump said.

CNN’s Jim Acosta asked if he’s saying that there are terrorists in the caravan. Trump said “there could very well be,” adding, “I have very good information.”

He tagged in Vice President Mike Pence to talk about his call with the president of Honduras, and he said at one point it’s “inconceivable there would not be individuals from the Middle East as part of this growing caravan.” Acosta asked him directly if he has evidence of terrorists in the caravan, as opposed to just citing statistics.

Trump jumped in to say he’s spoken with the border patrol and they’ve intercepted “many people from the Middle East” and even ISIS at the border. Acosta again asked, “Are they in the caravan?” “They could very well be,” the President responded. “But there’s no proof,” Acosta noted.